A couple weeks ago some children were interested in playing with the small dinosaurs in the water. Michael asked, "why does it sink?" The teacher had also placed some of the dinosaurs on the ground on a mat beneath some bark pieces. The boys asked if they could add them into the water. The teacher prompted them to look at the dinosaurs on the ground and the ones in their hands and asked "which ones swim?" Michael pointed to the ones with fins and said "these ones because they have things that help them swim." The teacher asked what the other dinosaurs had. Jacob observed, "feet." They continued to play keeping the different kinds of dinosaurs separated and then decided to put the ones with feet into the water as well. 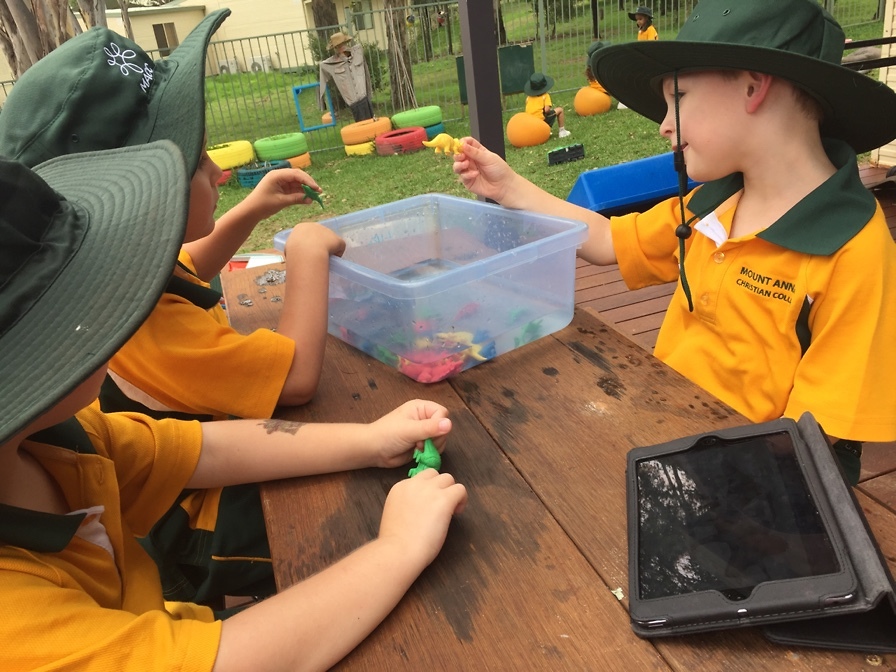 Henry joined in and was making a dinosaur try and walk up the water container. He said "I can't get in. I'm too short." The teacher added, "and he can't swim. He doesn't have fins!" The teacher took one of the dinosaurs from the water with feet and played with it saying "I'm going to go back over to the mountain where I can walk 'cause I don't have fins for swimming." Henry followed and played there briefly. The children were more interested in playing with the water though, so they returned their dinosaurs to the water.
Henry asked, "what kind of dinosaur is this?" The teacher grabbed an iPad and began looking up dinosaurs to find out what kind of dinosaurs we were playing with. The teacher asks the boys to describe what the dinosaur looks like so she can find out what kind it is. Henry said "it has a long neck and fins."

The boys went through each dinosaur, describing it's features and the teacher wrote their descriptions in the search engine in the iPad. They compared images until a match was found. Jacob said, "I found a bone at home. I thought it was a dog bone, but it's a dinosaur bone! It's from the museum." A brief discussion then developed about museums and what things had been seen at museums.

Following up this exploration and the boys' conversations about dinosaurs and museums, we have created a dinosaur exhibition in our role play area, as well as an excavation site.

The children have taken on different roles in their play, including palaeontologists, curators, visitors.

The children have made many discoveries in the excavation trough. Some children match he dinosaurs to the pictures. Some dinosaurs didn't have a picture so we investigated to find out what kind of dinosaur it was and then drew a picture of it.